cPanel vs Plesk. What is better? Which panel to choose?

it is normal and even expected that there is always some kind of comparison and often the fateful question, which is the better of the two?

What is cPanel? What is Plesk?

Both are web hosting panels. More specifically, they are panels where the resources you have at your disposal are concentrated when you buy VPS. In the same way that the Control Panel in Windows is for your computer, they are for your hosting.

In fact, you can say that they control everything you have at your disposal in your hosting account, such as creating e-mail accounts, and databases, adding subdomains, spam filters, automatically scheduled actions, performing backups, adjusting settings, and installing CMSs, etc.

Therefore, it is possible to say that almost everything you do in the hosting account, depends on the hosting panel and so it is unnecessary to go further for you to understand its importance.

There is a good chance of maintaining the company and its policies and consequently of supporting the customer base.

Unlike Plesk, cPanel is exclusively intended to control servers with Linux operating system. Thus, automatically if there is a need to host some application or services native to Windows, the adoption of cPanel is ruled out.

On the other hand, being the oldest panel for Linux servers, cPanel ends up benefiting from a more stable, secure, and better-performing environment that Linux provides. The cPanel on top of CentOS and Ubuntu distribution is one of the most used combinations in hosting environments, resulting in very solid web servers.

cPanel gives access to the development of APIs (Application Programming Interface). It is a programming interface based on a set of standards for application development. With this, many development companies create applications integrated into cPanel, making it easy to use them on a hosting platform.

Although similar work is done in relation to Plesk, the set of APIs based on cPanel is much broader and more varied. This is a particularly advantageous aspect for the user who can often have complex services installed on their hosting account with just one click, such as Softaculous.

cPanel has a reseller hosting a panel with well-determined and simple-to-use functions and features, which is WHM (Web Host Manager), which Plesk does not offer under the same concept. This makes managing resellers under cPanel a much simpler and more intuitive task.

Plesk is not that much newer than cPanel. Although 5 years of free-roaming on the market for cPanel, were enough for him to conquer a much larger customer base and a chunk of the market. Plesk has worked well to try to regain the lost ground after it. 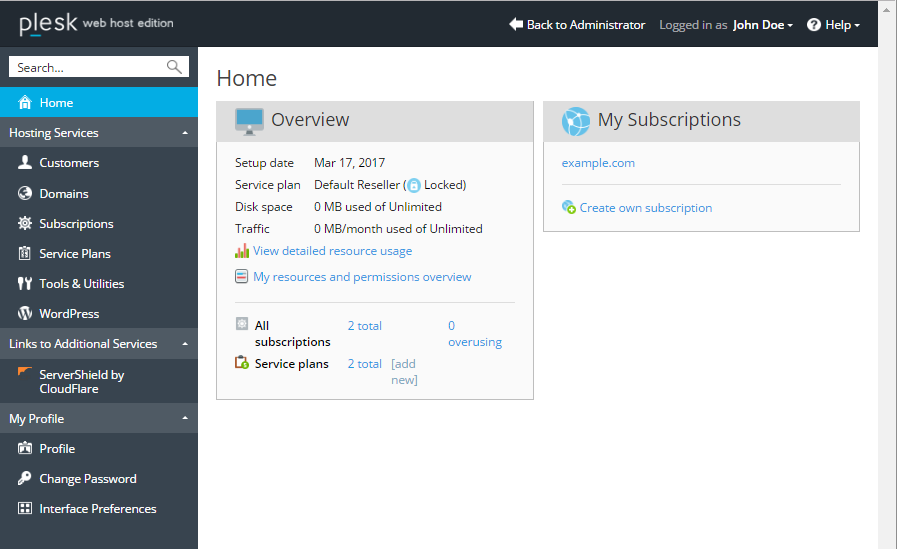 One of Plesk's main features is that it has versions for both major server operating systems: Linux and Windows. For this reason, it is often said that migration between one and the other is simpler. However, it is known that in some cases manual adjustments have to be made when migrating from one platform to the other and the manual labor savings may not be so advantageous.

Another important feature is also the most obvious one since if something in your web project requires Microsoft technologies, for example, ASP programming language or Access databases, you necessarily have to opt for Plesk since cPanel does not run on servers from the Redmond company.

It is also said that migrating cPanel accounts to Plesk is easier than the other way around. Plesk has features to automate the migration of an account coming from cPanel, whereas cPanel does not have the same over Plesk.

Stop wasting around! Which is better? cPanel or Plesk?

Although there are objective aspects that allow placing some characteristics of both side by side in a table and rating them or giving grades, with the purpose of a fair comparison, not everything can be compared or can be evaluated in an objective and unbiased way.

An example of this is the interface of both. They are different and the organization, appearance, and navigability of cPanel and Plesk are quite different, but it is a subjective aspect of the evaluation. There are fans of one and there are fans of the other. There is no way to say for sure which one is better without using personal criteria.

Another aspect, to name just one more example, is even more controversial and concerns security. Usually, Plesk updates and security fixes are faster, but on the other hand, the frequency with which they occur is much higher. In other words, is it better to have security issues fixed faster, but be exposed much more often? Questionable, to say the least.

There are also a large number of small differences between the panels, but these are not definitive reasons for choosing one or the other, such as, for example, the small difference in the licenses of both.

These are the two main names when it comes to hosting panels. Whichever one you choose, you will be supported by serious, established companies that do their job to deliver the best to manage your web hosting.

This is almost a writer's opinion and not a verdict, in general terms, it can be said that if a Linux hosting environment 100% meets your needs or your idea is to resell hosting, go for cPanel, which has a greater set of favorable features. If you need Windows, go for Plesk, not because cPanel doesn't compete in this area, but because Plesk is a quality option.

Blog
Latest posts
A Guide on How to Reinstall a VPS How to Find Out the Correct VPS IP Address? How to Find OS Version with a Command Line for Windows, CentOS, Linux, Ubuntu How to Add Funds to My Account and How to Check My Balance? How to Set up Your Mail Server